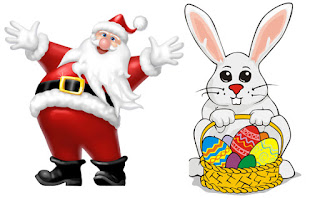 Some years ago I was an amused onlooker as about twenty editors had a fierce and bloodthirsty battle over whether or not the Easter Bunny deserved a capital B for bunny.
I’d edited a book where the Easter Bunny (or possibly bunny) played a minor role. The author had given him two capital letters and that had seemed correct to me.

Little did I know.

The battle ranged back and forth for three days with references from the Chicago Manual of Style (the bible for editors internationally) being tossed like bombs into the fray.

Santa Claus gets two capital letters because that is his name, Mr. Santa Claus, just as Ms. Jane Doe or Mr. John Doe would be capitalized. But the Easter Bunny (bunny) is different. Easter is a proper noun so it’s capitalized. But a bunny is just a bunny (lower case) unless his real name is Mr. Bunny.

Then someone mentioned the Tooth Fairy (or tooth fairy). Is she Ms. Tooth Fairy, or Ms. Fairy (lowercase tooth) or… That caused the argument to reignite and continue for another couple of days.

In the end the publisher declared it too difficult to decide a winner from CMOS rules alone and directed that henceforth House Style would be two capital letters for all such characters.

I noticed even Google is sitting on the fence for the Easter Bunny with Wikipedia giving it a capital but the search engine using a lowercase b.

Writing professionals take their job of being completely accurate very seriously. Never ever get between two determined editors arguing a point of professionalism.

Helen Woodall
helen.woodall@gmail.com
Helen is available to line edit and/ or content edit fiction and non-fiction. Rates on application.

My position as an author on this: write it whichever way feels right. Then be prepared to hit "change all" as your editor or house requires. :)

Helen Woodall: Freelance Editing
Helen has been editing professionally and full-time for over twenty years, first for an Australian company with newspapers, magazines and books in their stable; then for an Australia-wide newspaper; and finally for a romance publisher from 2006 until October 2011. She is now a freelance editor of both fiction, and non-fiction, using US English or Australian English.